I'd just mixed up a stimulant drink ready for a gym session when Ian Mc passed on a message that Gav had re-found the lingering Caspian Gull on the Axe estuary again; thankfully the concoction had not yet been consumed so in the fridge it went and I headed out with camera & scope. When I arrived on scene Gav was still there and the bird was nice and obvious; it really stands out even when asleep with it's head tucked back. This is the same bird as the one I had on 17th January and posted about HERE. Also well worth reading Gav's post HERE if you haven't already done so; the same bird has been seen on Jan 17th, 22nd, 29th and February 8th.

I was really hoping for some decent flight shots but it wasn't to be. It finally took to the air at 17:00 when it was raining and getting dark so the pics are not great. If only it had had a flap around earlier when conditions for photography were only fairly bad rather than utterly horrendous... The bird flew from the mud to the river for a few seconds and it was fairly close to the car (well, close for a gull anyway) so the views were excellent. These are my best shots of a Casp so I'm happy, but there's potential for much better here; hopefully it continues to linger. The photos are massive crops with less than 3% of the original pixels left (plus a bit of cloning in one pic to remove a Herring Gull wing tip). Here's the best of what I managed: 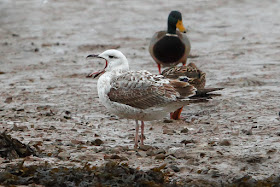 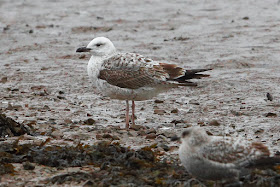 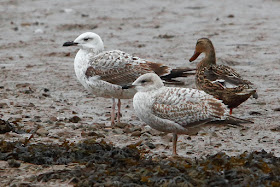 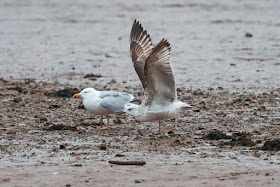 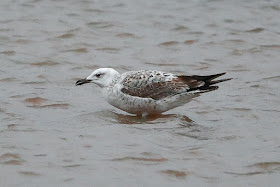 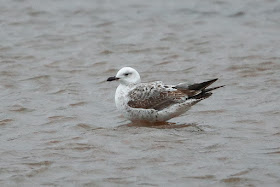 A bit off-topic but these shots taken in bad light looked terrible when I loaded the pics on Lightroom (my go-to RAW processing software) but the Canon software bundled with the camera body did a much better job of making the bird look colourful & contrasty rather than 'flat'. RAW files are deliberately lacking in contrast, sharpness etc, especially those from Canon bodies but that's because they are meant to be processed later. Some cameras such as old compacts etc shooting JPEG do this processing for you (can tweak it further later of course). The difference in appearance of the same files on those two different software packages was quite surprising though. I tend not to use the Canon software as the organisation and library features on Lightroom are much, much better and I'd far rather take 30 seconds to edit a pic than a few minutes!

Anyway, I'm off to have a scan of what's on the estuary...